To give you an idea of how big an album the fifth one from Kansas, Point of Know Return, was: my first arena show after moving to Memphis in August 1978 saw the band playing to a sold-out audience on a non-stop tour nearly a year after the album’s October 1977 release! And coming on the heels of the Kansas breakout effort Leftoverture only a year earlier, Point of Know Return was easily its equal, containing “Paradox”,”Portrait(He Knew)”,”Sparks of the Tempest”, the soaring epic “Closet Chronicles”, “Nobody’s Home”, “Point of Know Return”, and Kerry Livgren’s truly legendary “Dust in the Wind”.

With back-to-back quadruple platinum albums Leftoverture   in 1976 and Point of Know Return  barely eighteen months later, the band Kansas was assured of permanent statehood in rock history. Formed organically as a” band of brothers” in Topeka, over the course of more than four decades Kansas has proven to be bound together as much by shared struggle as by shared success. Having sold over thirty million albums since their 1974 debut, that’s impressive.

Kansas original band members Kerry Livgren, Phil Ehart, Steve Walsh, Dave Hope, Richard Williams, and Robbie Steinhardt shared a dream and honed their tight sweeping sound 1500 miles away from the American music business hubs of New York, Los Angeles, and Nashville, but band co-founder and ex-guitarist/keyboard player/songwriter Kerry Livgren told me In the Studio that the members of Kansas studied the leading British progressive rock bands as if their lives depended on it.

“Being from Topeka KS, just because it’s surrounded by wheat farmers in the Midwest, didn’t mean that we weren’t exposed to every kind of music,” Livgren reminds us. “You could live in Cody WY and go in a record store there and buy the same records as someone in New York City. People assumed that because we were from Kansas that we should be a fiddle band or something. We heard all kinds of British rock, from Cream to King Crimson.” 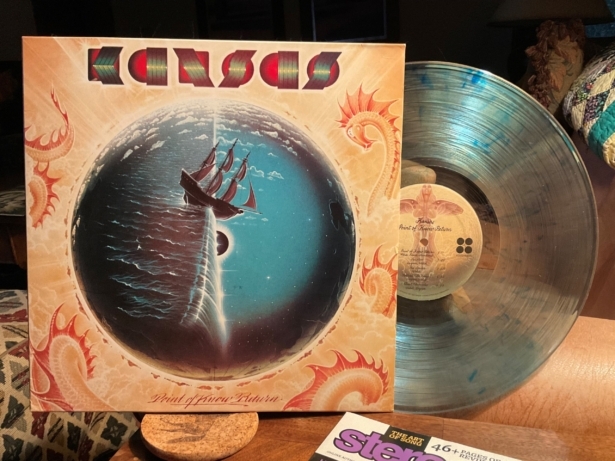 Drummer Phil Ehart recalls those early pre-“Wayward Son” days ,” We were all poor as church mice. Nobody had a nickel to their name. We all lived in a “band house”, and every dime we made went back into the band and keeping our bass player Dave in cigarettes!” Kerry Livgren concurs.” In 1970 for the year I made five bucks. That’s below any poverty level I know of.”

It would take Kansas no less than four trips to the plate before they would touch all the bases with their 1976 Leftoverture  release, but even after selling four million copies, many rock critics continued to dismiss the band even though most couldn’t have found Topeka with a map. “The fact that we were an American band which emulated a lot of the progressive rock from England bugged a lot of American music critics,” Livgren explains in this classic rock interview. “They thought, ‘You shouldn’t sound like that if you come from Kansas’! Apparently real people didn’t seem to care, ’cause we sold millions of records anyway (with the next Kansas album in 1977, Point of Know Return).”

This edition of In the Studio features a rare reunion of my guests Kerry Livgren and Steve Walsh with current Kansas members Phil Ehart and Richard Williams, and is dedicated to original violinist/singer Robbie Steinhardt who passed away in July 2021. –Redbeard