Dan Baird, ex-lead singer/songwriter of the Georgia Satellites  and  The Bluefields, said it best in October 2017 when Tom Petty died: “This one feels like family.” Certainly other classic rockers had been passing away somewhat predictably, in some cases alarmingly so, but Tom Petty’s passing was devastating to a lot of us who had the pleasure to work with him over his exemplary career. When we met in 1978, we were both in our mid-twenties, but I realized even then that Tom had a very old soul, wise and true, and that sense only increased over the next four decades.

Prior to this conversation, the last time I had interviewed Tom Petty had been in Dallas in the Fall 1987 when he and the Heartbreakers had toured supporting Bob Dylan. Petty had his first wife and daughters with him on the tour because they were quite literally  homeless after an arsonist had set fire to their home while Tom and family ate breakfast, barely escaping with their lives but losing everything but the clothes on their backs. Now in May 1988, almost a year to the day later, the Pettys were real-life “Refugees”, staying in the Beverly Hills home of Maria del Rosario Mercedes Pilar Martinez Molina Baeza, “Charo” for short. The life-sized gold lion statue in the foyer was a dead giveaway. “Cuchi cuchi, y’all”. You just can’t make this stuff up.

We sat down in the workout room that  Charo used apparently to…well…defy gravity, I suppose you’d say. Shortly after starting the interview about the making of Tom Petty and the Heartbreakers breakthrough third album Damn the Torpedoes , a modern day thriller complete with intrigue, heroes, villains, intimidation, brawling, and courtroom drama, Tom casually mentioned that he had been working on his first solo material, and would I like to have a listen to what he’s done so far in Heartbreaker Mike Campbell’s garage?

We retired from the dark, cave-like exercise room with the chocolate brown shag carpet and heavily draped windows to a bright sunlit modern home office. From behind the small desk Tom Petty popped a cassette into a small stereo system sitting on a wall-mounted shelf and proceeded to play five unreleased songs, including“Free Fallin’ “,”I Won’t Back Down”,”Love is a Long Road”, “A Face in the Crowd”, and “Running Down a Dream”. As the golden May mid-morning Southern California sun bathed the room in light, I distinctly recall scribbling furiously my initial impressions  on my notepad. When we returned to the workout room where the interview recording equipment was waiting, apparently I must have effused so enthusiastically about the unreleased solo recordings which Tom had just shared that the encouragement was noted by Petty when he thanked me in the liner notes when Full Moon Fever  finally came out a year later.

So now here I sit exactly thirty years later April 20, 2019, howling at the full moon rising on the eastern horizon, delirious from the only fever which I never wanted to  break. –Redbeard 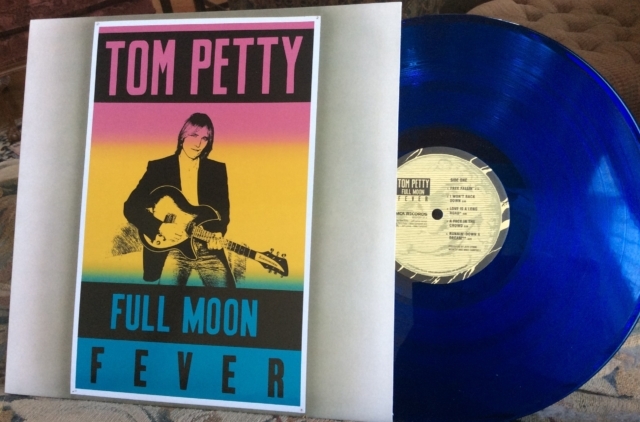