Hands down, Deep Purple‘s Now What?!   was the album to beat in 2013 for “Comeback Album of the Year”. Not that the Fathers of Heavy Metal ever went away from touring the world these last years, but Now What?!  was their first new studio album in seven long years. Even before we heard anything, the first indicator that something truly special was under wraps was the news  that Pink Floyd and Alice Cooper veteran producer Bob Ezrin was on board.

When I heard “Hush” pumping out of my little portable transistor radio in 1968; or when I played “Child in Time” over the high school PA system during home room announcements in 1970; or cued up “Strange Kind of Woman”,”Highway Star”,”Smoke on the Water”, and “Space Truckin’ “ on my first radio shows in 1972, could anyone of us have predicted that I would be raving about a new Deep Purple album in 2013? Sure, even as recently as 1984’s platinum comeback album Perfect Strangers, Deep Purple taught us to never underestimate the core pillars of this band: lead singer Ian Gillan, bulletproof drummer Ian Paice, and bass player Roger Glover, but with Now What?!, Deep Purple exceeded all expectations. I am pleased that Roger Glover returns to In the Studio to show us how.- Redbeard 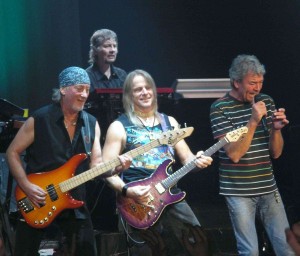